Martell Bivings’ next-door neighbor in the Jefferson Chalmers neighborhood waves an energetic hello, calling him “congressman.” He’s an optimist; Bivings, 35, has to pull off a major upset to earn the title. Running as a Republican in a safe-Democratic district, he has to beat the well-funded Shri Thanedar, who himself beat eight other candidates, all of them Black, in the August primary for the 13th District seat. But Thanedar, while a person of color, isn’t Black, and Bivings is, a lifelong son of Detroit who grew up and was educated here. This is his first run for elective office. 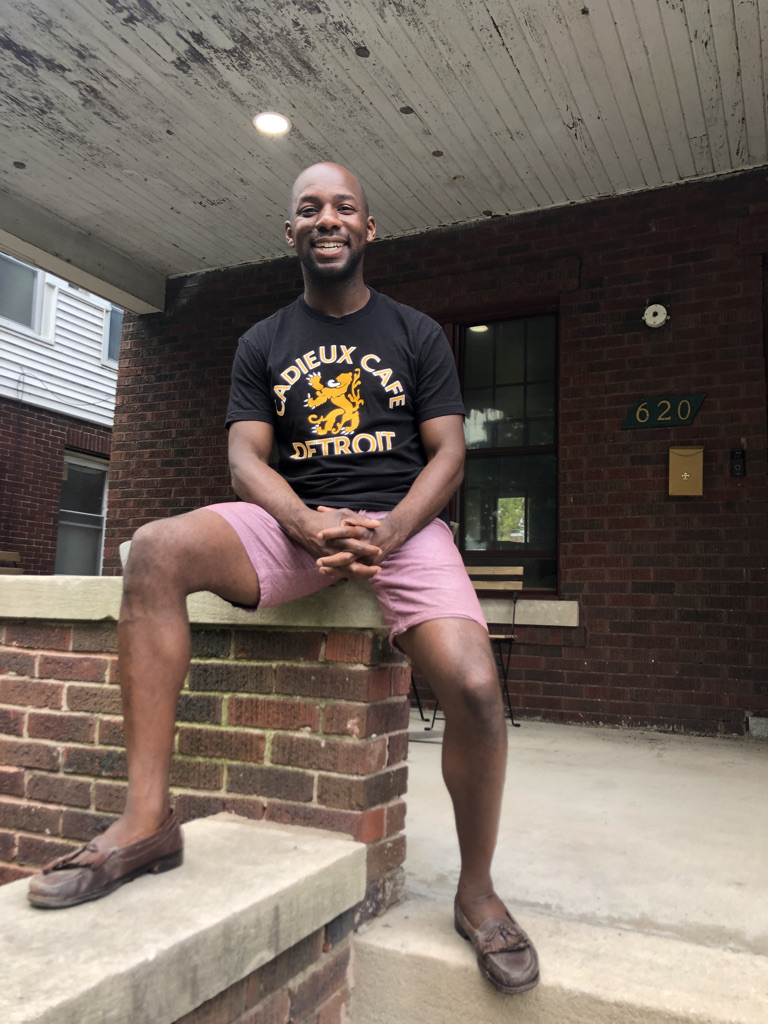 Martell Bivings at his home in Detroit (Photo: Nancy Derringer)

Bivings is as much an optimist as his neighbor. A business liaison in District 4 for the Detroit Economic Growth Corporation, he describes himself as a qualitative researcher with an analytical mind; he thinks he can pull it off, and speaks of “when,” not “if,” he wins the seat.

Deadline Detroit talked to Bivings on the front porch of his east-side Detroit house last week. The interview has been condensed and edited for clarity and brevity.

So I think people who read this should know that you and I have a history. We were precinct poll workers together in 2020. I sat next to you and we made small talk all day. It was like a first date that lasted for 14 hours. I feel like I know a lot about you. I know that you are a Detroit native. You went to Cody High School. You come from a large extended family, you went to Howard University on a dance scholarship. You pledged Alpha Phi Alpha. You support strong arts programs in schools. You work in economic development for the city. And I spent all this time with you and I never knew you were a Republican.

Yes. That's beautiful. Are we gonna open a story like that? That is beautiful.

Is this something new, or have you always been a Republican?

I've always been that way. It's been a cognitive dissonance struggle for decades. Especially growing up in an African American family in the north because my Southern family are straight up Republican. When I hang out with some of my Republican friends up here, all of whom are white, I laugh because they 100 percent remind me of my Southern family to a T. The conversation, the dialogue, the relaxing, the focus, the pursuits, the scares, everything reminded me of my Southern family. And I just had to laugh ‘cause I'm like, wow, these people would not even understand how I'm comfortable right now.

And what traits do they have in common?

Hunting. Fishing, Economic prosperity, uh, work for yourself. Get it on your own. My Detroit family, they’re 100 percent hardcore left Democrats, but when you talk to them one on one, you would think they lean conservative, extremely conservative. I would talk to my grandmother and she's from Parksville, Mississippi. And she said, “When I came up from Mississippi, everything I had fit in one trunk. And we worked for everything. Everything, every house we got, we worked for it.” She said that my granddad in his later years didn't like turkey necks. Because when we were so poor, that's all we could afford. You know how you go to some restaurants and people are drinking out of a jar? That was a high insult to him. They worked so hard to not have to drink from jelly jars. To be able to buy glassware was on the way up.

We talked about your family again when we were sitting next to each other and it sounds like they're very family-oriented. They have religion. They do for themselves. They don't wait for others to do for you. All that stuff. That's your personal platform then?

Yes. And that is not what Democrats are pushing at a high level. You gotta stand on your own. (My uncle) had his father's gun in the house. He said, remember when he first moved to Chicago, someone broke into the house and that gun saved his life.

So how did you decide you were gonna run for this seat? This is considered a safe Democratic seat. You’re facing Shri Thanedar, who has a lot of money. Is this a suicide mission?

It was a very emotional journey to say do it. I mean, I talked to my grandmother, talked to my friends. In fact, I went to a bachelor party with my Howard roommates in February. So we met in Richmond and I'm telling them I’m thinking of running for Congress as a Black Republican.  And by the time we left that weekend, I got their blessing. (One) said, well, you know what? If we are going to have a Republican that's Black, at least it should be you because you are (intelligent) and you could push back from an intellectual perspective. We support you. You have our blessing.

What makes me different from most Republicans is, this is where I live. And it makes me be able to relate with the brother who was cutting grass next door. He’s a Trump supporter, and I could understand why that guy would be. And in addition to understanding why he would be a Trump supporter, I'm able to use him as a qualitative data point and say, where else does someone like you exist? And is there a possibility that they are a Trump supporter?

What sort of choice are you offering to the 13th district? Shri is a person of color, but he's not Black. Do you expect Black Detroit Democrats to support you anyway? Can you say to a Black Democrat, who has seen Charlottesville, who has seen “shithole countries,” who has seen some of the most open racism that we have tolerated in this country for decades, much of it from conservatives – how do you say to a black Democrat, “I come in peace and I'm here to represent you.”

I say it just like that. I say, hey, my name is Martell Bivings and I'm running as a Republican. (If I’m elected), for the first time we'll be at the table of the Republican party. Those will be my friends and I'll be able to advocate our interests. Because first, I'm a Detroiter.

It's a funny space that I'm in that most Republicans, most Democrats, don't get to be in. For instance, last Saturday, I was at the National Action Network. That's Al Sharpton's agency. I was there and they let me speak. And it was a very pleasant, respectful, back and forth, transactional dialogue. There were about 35 people. It wasn't as packed that day because it was the day of the Democratic convention. So a lot of their members were in Lansing. But more than half supported me.

As you knock on doors, what do voters want to know about you and what issues are they asking about?

I'm gonna forever support the signature process (to qualify for the ballot), because this is a good haze. If the candidate is doing the signature process, you have a nice quantitative and qualitative understanding of where the people's issues are. By the time you submit your signatures, you should have your platform. For me, it was school choice, lowering taxes, gas costs, easier pathways into entrepreneurship. Those were my strong points to get signatures. Not one person was against school choice. If I met someone against school choice, they were a teacher. Or they worked for DPS.

But let's say you don't win. If you wake up the day after the election and stare at the ceiling from your bed and think about this experience, what do you hope to have gained?

I want African Americans to leave the Democratic party in such a way that we move the Republican party back to its truest principles of Abraham Lincoln and Frederick Douglass, and we get more involved. The party is extremely welcoming. I have not been prayed over so much in my life as I have from March to now. And I have a platform now for my ideals. I want to contribute my ideals into the American experiment.