Even in the topsy-turvy universe of Republican campaigns for Michigan governor, this seems like redefining bad as good.

Detroit's two daily papers and The Grand Rapids Press quote political "experts" who see an upside from Ryan D. Kelley's FBI arrest Thursday on charges of disorderly conduct and three other misdemeanors at the besieged U.S. Capitol on Jan. 6, 2021.

"It might bring him a certain sense of sympathy for having to go through an ordeal like that," North Oakland Republican Club leader Matt Marko tells The Detroit News. The paper also quotes state Rep. Patrick Outman, R-Six Lakes: "It's probably going to amp him up."

Perhaps next we'll hear that up is down, day is night, the Earth is flat and the law of gravity is repealed.

In the candidate's home region, follow-up coverage in The Grand Rapids Press starts:

"Ryan Kelley may now be the most prominent candidate running for the Michigan Republican Party's gubernatorial nomination. While Kelley’s arrest may be a long-term problem, political experts see it as a short-term opportunity."

Got that now? It's an opportunity, more than a liability.

"His name ID will go up, but will be associated with what's normally considered as negative news. ... The other candidates have a pretty easy response, which is some sympathy but also: 'OK, this is not a good way to win a gubernatorial election.'"

"What happened on Jan. 6 ... was a heinous attack on our government, and regardless of your politics it should disgust and horrify any of us." 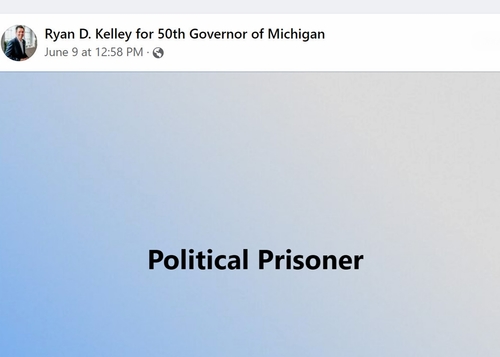 For his part, Kelley -- a 40-year-old real estate broker from Allendale in West Michigan -- calls himself a "political prisoner" in a social media post.

An FBI agent says in a court filing that Kelley gestured “to the crowd, consistently indicating” that people should move toward the Capitol entrance."