Bowens: In this Detroit suburb, race is the Pointe

A 60-foot billboard towers over the Mobil gas station at Alter and Jefferson with a pointed message for drivers traveling west: ELECT WHITEY in Grosse Pointe Park this November.

Okay, not exactly. But to many, that’s exactly what the sign means.

Words have meaning, and when paired with pictures, they have power – especially during a hotly contested Grosse Pointe Park election for mayor and city council this November. At first blush the words seem innocuous enough – “PROTECT OUR HOMES AND PARKS. VOTE for PARK VALUES AUG 3 NOV 2.” 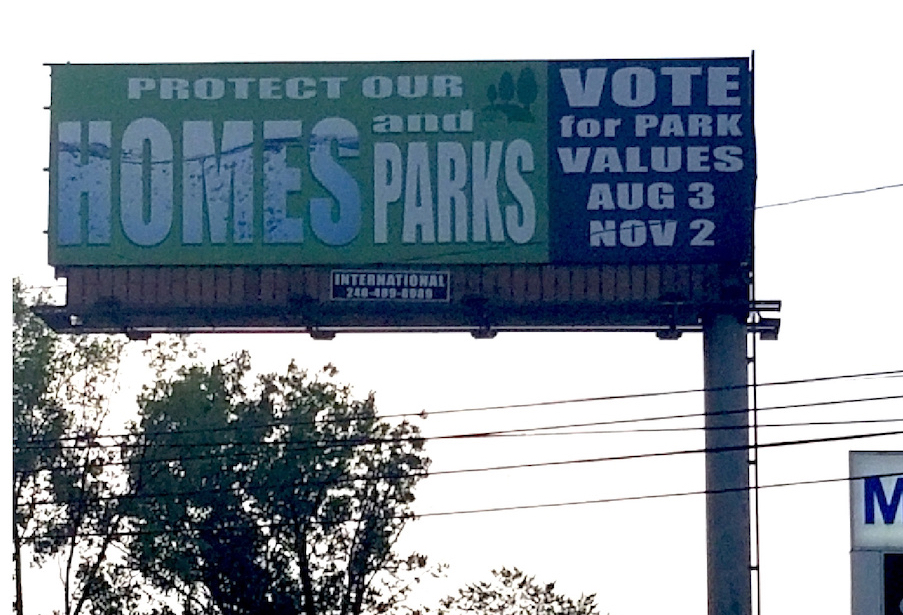 The letters in HOMES are illustrated with water inside, a reference to the recent flooding that devastated portions of Detroit’s east side and the Pointes, particularly in the Park.

We get the message. The first part is telling voters to elect people who will deal with infrastructure and flooding. The second is the problem.

It’s a reference to the ongoing gaslighting around the issue of opening up Grosse Pointe Park’s two residents-only recreational areas, which aren’t parks so much as near-country clubs, with pools, marinas, picnic areas, even a movie theater. This election cycle, the rumors and accusations have been flying: Some council candidates want to open the parks not just to residents carrying a pass, but to...anyone.

But nobody running for office is advocating the parks be open to the general public. No lawsuits have been filed. Nobody is protesting at city hall. Erecting a sign suggesting otherwise is gaslighting an issue that doesn’t exist.

Fear is born out of change. The Park had its first African-American councilwoman, Darci McConnell, appointed last year. New City Manager Nick Sizeland, in the face of much criticism, took the bold step of changing the hiring process for a new director of public safety to attract and interview the most diverse field of candidates in the city’s history.

And he had the audacity to hire not one but two minorities as sworn police officers to the public safety department – a first in the city’s history.

The first majority Black church, St. Paul AME, continues to flourish after moving here a couple of years ago. Black Lives Matter signs still adorn many lawns, long after the trial and conviction of the officer responsible for his death in Minneapolis. And people went crazy marching and hollering up and down the streets in support of a Black family whose next-door neighbor hung a KKK flag in his window.

Grosse Pointe teens led BLM marches through the streets. WE GP held a women’s march and rally at the same spot before starting their annual LGBQT Pride march. And that Grosse Pointe-Harper Woods NAACP Branch continues to raise a ruckus about this and that racial thing. Opposition to efforts opposing racial inclusion (disguised as opposition to critical race theory being taught to kindergarteners) is the latest. Now some City Council members are hosting meetings talking about race and inclusion on Zoom.

It all must be too much for some. As one council candidate puts it in his campaign slogan, “It’s time to get the council back on track.” Back on track to what? To me, it says back on track to electing whitey and stopping all this nonsense about diversity and inclusion. Or as the sign says: PARK VALUES.

Anyone hear a whistle?

Values. Now there’s a buzzword. “Values” has been co-opted by the right for a generation now to mean “conservative.” And more recently, it’s been bound up with white nationalist propaganda about protecting “western” culture (whatever that is).

And therein lies the dog whistle. Some of my white neighbors say they hear it as a call to elect white candidates who will protect “culture” in Grosse Pointe. No more diversity talks or hires. No more asking pesky questions about donors, their influence and city land deals either.

My Black and brown neighbors see the hounds being unleashed to chase down and stop progress.

Which values are we talking about here? We don’t know. Sources in a position to know say the person who rented the billboard is Park resident and businessman Fred Detwiler, the husband of former city councilwoman Barb Detwiler. Both have been lauded for their philanthropic work and volunteerism. They’re both public figures but since Fred is the guy who bought the billboard, Deadline Detroit reached out several times to talk to him and ask exactly what he meant to convey to his neighbors about protecting parks and voting on the issue of values.

Fred hasn’t returned messages left at his office and at a listed number. A person who answered the phone at his office in Oak Park said he was out of town but promised to deliver the message (again). No one answered his door after the blue light under the camera doorbell swirled at the Detwiler home.

As the French founders of both Detroit and the Grosse Pointes would say, c’est la vie – such is life. The secrecy is par for the course this election season in the Pointes. A voter education nonprofit called Greater GP has cropped up with a website and social media presence but no visible board members.

And secrecy is the way to go because you know (wink, wink), why get caught up in all that drama when we know that around here race is the Pointe.