Bowens: Fighting Back Against Racial Profiling at Detroit's 8 Mile Border 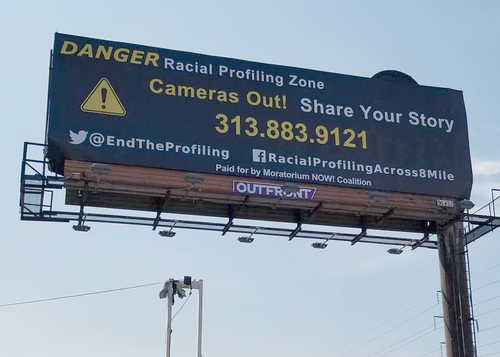 Detroiter Ed Black looks up at the billboard with a new sense of hope.

High above the Golden Greek Bar, at the corner of Marx and 8 Mile, a billboard went up around 1 p.m. Monday afternoon.

“Racial profiling zone? This is it! This is the zone,” says Black.Facing east, it blares a warning for westbound drivers: “DANGER Racial Profiling Zone. Cameras Out! Share Your Story 313.883.9121.”

The billboard towers above the intersection at 8 Mile and Dequindre – where the borders of Detroit, Warren and Hazel Park meet. This sign is for Hazel Park in particular but all the suburbs adjoining Detroit in general. It’s the third and newest such warning along the city's northern border, erected by the Racial Profiling Across 8 Mile Committee – a loose confederacy of 10 activists in Detroit and the surrounding suburbs.

Black knows racial profiling. The 50-year-old has been a bouncer at the Golden Greek Bar for 10 years. Black tells story after story of being stopped and harassed on his way to and from work by suburban cops along 8 Mile. At work, he said he watches Hazel Park police park the wrong way on Marx’s one-way residential street off 8 Mile several times a week, lurking to catch unsuspecting drivers. Their other favorite spot is the Walgreen's lot across the street at night where they can get a better view of patrons leaving the bar. 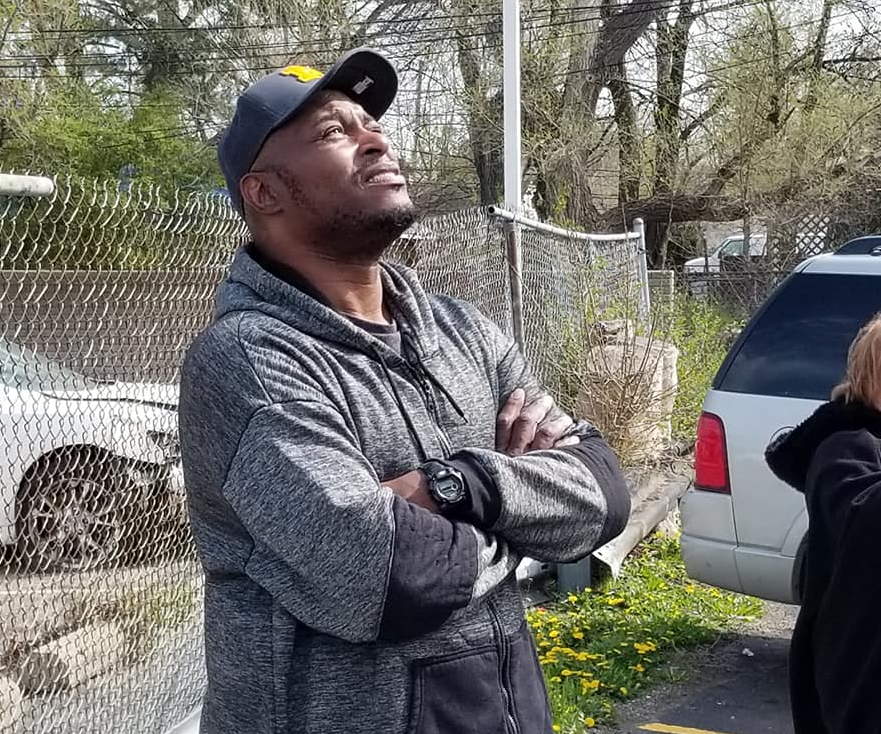 “This has been going on for years,” says Black. “Hazel Park is the worst.”

Maybe. Maybe not. The committee reports driving, walking or riding a bike while being Black is asking for trouble along 8 Mile Road. The billboards, paid for by donations, target Eastpointe, Ferndale, Hazel Park and Warren. Even the liberal enclave of Ferndale remains suspect for its policing; although the municipal border runs down the 8 Mile median, suburban police often patrol, stop and hassle motorists on both sides of the line, committee members complain.

Ask Kenya Fentress. The 47-year-old mother lives up the road in Detroit, right off 8 Mile and Lasher. She says she started the committee last May after two things happened – the murder of George Floyd in Minneapolis and another event closer to home.

Her son was robbed by two men who said they were police on Gratiot and 8 Mile, she said.

"He didn’t know them. They just watched him go to the ATM machine," Fentress said. "Stopped him walking from the machine. Said he fit the description of someone reportedly with a gun. They said it was his lucky day because they got another call.”

Fentress says the otherwise unidentified men, riding in an unmarked car, let her oldest son Dameon Fentress go, but kept the money he had just withdrawn from the bank. Every detail of the frantic telephone call he made to her still burns in her memory. (He didn't report the robbery because he was wanted on a child-support warrant.)

A few months later, he was murdered six days before his 30th birthday, stabbed by a young woman he'd befriended. She's in jail.

Justice provides small comfort for a grieving mother. Kenya remembers other injustices, other insults, and the fear her son often felt just being Black and living in Warren along 8 Mile Road. He was harassed by cops constantly, she says, and if he didn’t like it, the cops would say “take your ass back across 8 Mile then.”

Fentress did the opposite. The community outreach worker started showing up at protests. She was there to support the Black Amazon delivery driver arrested in Warren for parking the wrong way. She was there for the explosion of Black Lives Matter marches across the region. She met other activists, told her son’s story and got people on board for a march that shut down 8 Mile last June and made headlines.

One year later, Fentress is tired but ready to do it again. This time the planned June march along 8 Mile will have more than protesters stopping traffic and bringing attention to racial profiling. They will have billboards screaming “DANGER Racial Profiling Zone” too.

And that is something Ed Black can look up and be hopeful for as well.